The International Handbook of Cooperative Law has just been published. The book represents a fundamental instrument for training and research, especially comparative, in the area of cooperative law. Legal scholars from 30 countries, spearheaded by co-editors Dante Cracogna, Antonio Fici and Hagen Henrÿ, jointly contributed to a unique book which presents and describes in the same context and in the same language their national cooperative laws, provides the reader with common concepts and terminology, and shows existing trends in cooperative law.

The degree of development reached by cooperatives of different sectors throughout the world, which among others led to the UN declaring 2012 as the International Year of Cooperatives, needs to be accompanied by a similar development of corresponding legislation. To this end, a better knowledge of cooperative law from the comparative point of view, as has already been established for other types of enterprises, becomes of great importance. This book strives to fill this gap, and is divided into four parts. The first part offers an analytic and conceptual framework with which to understand, study and assess cooperative law from a transnational and comparative perspective.
The second part includes several chapters dealing with attempts to harmonize cooperative laws. The third part contains an overview of more than 30 national cooperative laws, while the last part summarizes and compares these national cooperative laws, thus laying the foundation for a comparative cooperative law doctrine. 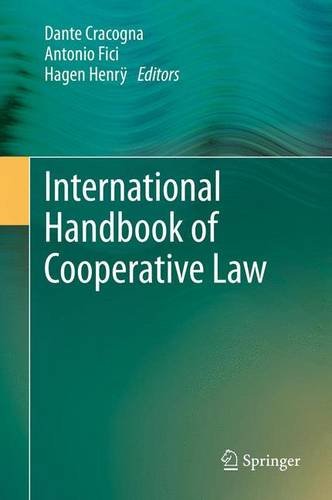