Unlocking the potential of the social economy for EU growth

On November 17th-18th, Italy launches a participatory and policy-oriented conference on Social Economy.

With the aim of contributing to the definition of the European agenda in the Social Economy field, the Italian presidency, during the semester of presidency of the EU Council, will dedicate careful consideration to the role of the social economy for European growth by organizing the international conference “Unlocking the potential of the social economy for EU growth”. The event will take place on November 17th-18th in Rome, Italy at the Auditorium del Massimo.

The event is organised by the Italian Ministry of Labour and Social Policy and represents one of the biggest summits on the theme in Europe. More than 190 speakers from 25 European countries – social economy practitioners, stakeholders, policy-makers, scholars and experts (as well as all of those who are interested in helping the Social Economy fulfill its potential) – will discuss the key issues affecting the development of the Social Economy in Europe. The debate will be organised in 12 parallel thematic sessions examining specific topics, such as policy support at National and European level, financial instruments and intermediaries or collaboration with the public sector. The conference opening address will be given by Giuliano Poletti, Italian Minister of Labour and Social Policy followed by a keynote speech by Jean-Paul Fitoussi (Istitut d’Etudes Politique de Paris Luiss – France) on “The Social Economy goes global”.

In the framework of the organisation of the Conference a public consultation was opened in the previous months in order to facilitate dialog and debate in a transparent and participatory way. Carlo Borzaga e Gianluca Salvatori, respectively Euricse president and CEO, participated to the evaluation of proposals, as members of the committee of experts.

At the end will be presented a conclusive document, based on the proceedings of the Rome Conference.

Read the conclusive paper: Unlocking the potential of the social economy for EU growth: the Rome strategy 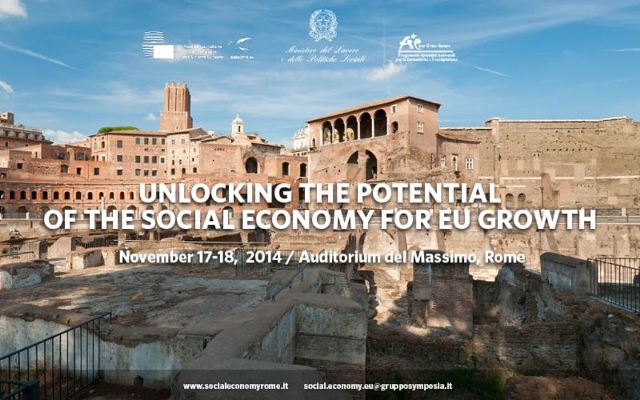